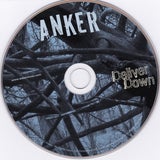 "Deliver Down (2012 Demo)" is Anker's first official release. It was released 7th August 2012 after a successful crowd funding campaign on Kickstarter.

A series of wonderful life events made Anker relocate to Mercer County, NJ. Those events helped Anker rediscover his music & songwriting that had been ignored & neglected in prior years while coping with not-so-wonderful life events. Anker hit the Mercer County, NJ music scene hard with the songs on Deliver Down. Many musical friendships blossomed from the connections he made at local open mic nights, but none were more important than the ones at Grover's Mill Coffee House in West Windsor, NJ.

Open mic nights lead to other live performances at local festivals such as Trenton's "Art All Night" & slots at Bordentown, NJ's legendary "Record Collector" where Anker opened for Vanilla Fudge's Vinny Martell & shared the stage for many Record Store Days with the likes of The Bongos' Richard Barone, The Successful Failures & The Paper Jets - all while maintaining himself as a solo acoustic rock act.

Little did he know as the new guy in town that NJ had the annual "Acoustic Music Awards". 2012 turned out to be the last year for these awards but they got Anker 3 nominations for his work on Deliver Down: top male listening room act, top new male act & top single/EP release.

"Deliver Down" is not quite acoustic & not quite a full band production. Anker kept the songs sparse with minimal production but avoided the trappings of being a sleepy coffeehouse songwriter. This allowed him to revisit some of these songs on future projects where skills, finances & time allowed more.