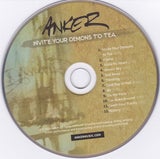 ANKER - Invite Your Demons to Tea

"Invite Your Demons to Tea" was released 7th December 2018. The title track & art work for "...Demons..." were inspired by Princeton NJ based visual artist, Priscilla Snow-Algava (1940-2019). Her series of tea stain paintings, specifically "Invite Your 11 Demons to Tea", triggered the thought of how it might be to sit at a table with oneself from various stages of one's life for the sole purpose of seeing how things went & how things may go. There would be no confrontation & fear, just the collected wisdom & conversation with many versions of the self.

Priscilla graciously allowed her art to be used as the album cover. Shortly before her passing, Anker acquired the original piece.

This album was a reaction to her works as well as an Anker family member's relapse, mental health decline & the nearly-complete abandonment of the family. There is an essence of a concept album here. Great thought was placed on song sequencing. The listener takes a journey with the title track as an overture followed by sweet love songs, discovering doubt, anger & ending with growth & acceptance.

In a 10th March 2019 interview with Jim Price on QWIK 105.9 "Homegrown Rocker" in State College , PA, Anker explained: "I wanted '...Demons...' to sound like the solid melodic rock that brought us from the 60's through the 90's. Everything has its purpose with drum breaks, open spaces, composed layered parts and guitar solos that bring more value to the song rather than just proving the guitarist can play all the notes in the key of A. I take my lyric writing style from the likes of people like Bowie, Reznor or Byrne where my presentation is vague enough for someone to make their own conclusions. I'm still trying to figure out what some of these songs mean myself."

As "...Demons..." carried Anker into 2019, it helped catapult him into an aggressive performance schedule that closed off the year with 100 gigs. Venues began to see Anker was not the usual boring acoustic guitar guy. They saw his rock roots & a growing repertoire of originals/covers differing from other solo acoustic acts that even rivaled most bands. Glenemere Brewing Company in Florida, NY said "Most bands can't cover what Anker is playing as a soloist. He's definitely not a sleepy coffeehouse act."

"Invite Your Demons to Tea" REVIEWS:

-... has that indie-shimmer that gives the album a feeling of gravity & sincerity. Somehow there is a simultaneous feeling of constant forward momentum track-to-track but a suspension in time while listening to a specific song. Complex harmony vocals, especially the “ghost like” female back-up vocal on "Desert Sky" give the songs another dimension, a world within the mind of the storyteller.

-“3.8/5 - The title track opener sounds like a Kiss concert but it’s very deceiving because it ends up becoming more like Jimmy Buffet or Steely Dan. “Flame” sounds more folk inspired & perhaps has some similarities to Grateful Dead. There are memorable vocal harmonies & guitar work on this song. I really enjoyed the variety of approaches because the songwriting was consistently good. That being said I did have some favorites which I thought were highlights. The emotional ballad “Sail Away” was heartbreaking while “Cold Day in Hell” felt like blue collar rock. The minimal “I’ve Been Around” is a sparse but emotionally heavy track that is melancholy & reflective. “Cover Your Tracks” was a warm & bright song with memorable vocal melodies. The closer “History” also had my number & it leans back into the reflective & melancholy mood. ​Overall, I felt this was a heartfelt batch of tunes with spot-on performances & songwriting.

HILLARY GOUN - writer of the original poem that inspired "Sail Away"