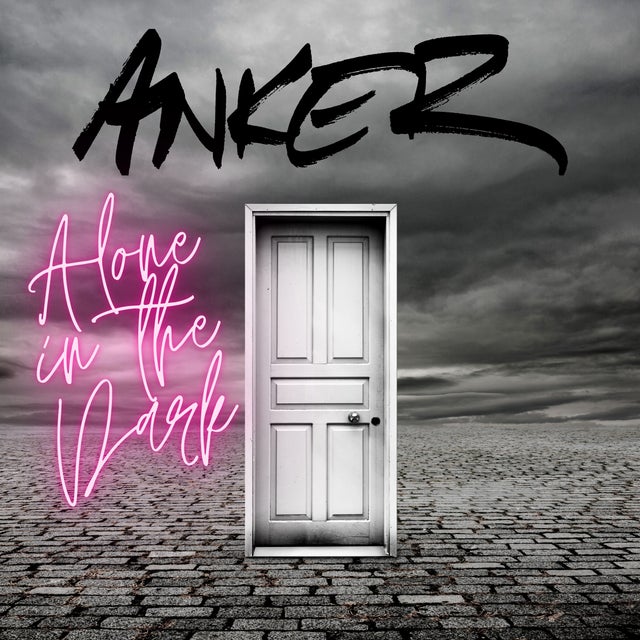 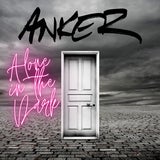 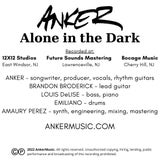 ANKER - Alone In The Dark

"Alone in the Dark" was released online as a digital single on 11th April 2022. The instrumental version is only available through this AnkerMusic purchase.

Anker gained momentum through 2019 with 100 performances supporting 4 CDs of material & a blossoming relationship with Dr. Louis DeLise that produced 2 relatively successful singles. In February, Anker attended his 3rd Millennium Music Conference in Harrisburg, PA but something was in the air. People started verbalizing concerns about a headline making "Corona 19 Corvid" thing. On March 15, 2022 Anker played his 19th 2020 performance before the world shut down. Things would resume on a much smaller scale later in August but until then ... it was quarantine time.

During the shut down, Anker kept the Grover's Mill Coffee House open mic alive with a lesser known video conferencing system called "Zoom" - which is now a household name & a verb. With the "Pandemic Open Mic", Anker used Zoom to unite his music friends across America & Canada for 95 weekly online open mics until passing it off in February 2022 to a new host who continues it to this day.

Earlier in 2020, before all hell broke lose, Anker's dear friend lost her husband under strange circumstances & symptoms. It was later learned that it had to have been an early Covid19 case that took 46 year old Kevin's life. Leading up to this, she had already lost her mother, father & dog in just a 2 year time span. An early version of the "Alone in the Dark" lyric was "How can you keep getting hit so hard?" but was changed to the current 1st person perspective.

In a press interview with World National Independent Radio (WNIR), Anker explained: "I feel it's a trendy & corny thing to hear current artists explain how they wrote their lyrics & what they were thinking. It's generally all the same stuff. The art really comes in the simple act of creation. Don't tell me how the sausage is made. I shy away from translating my music & lyrics. I feel uncomfortable sharing the direct inspiration for "Alone in the Dark" because I don't want to steal your experience. I do it for this song as tribute to Kevin & his wife."

Covid isolated people but there were ways around that. It also divided people & that made for new challenges. There were valid medical concerns & risks for all ages & races. Anker resumed live in-person performances 4 months after the shut down. Being alone on stage was likely the best place to be. It was also time to get "Alone in the Dark" recorded.

Remote recording started with Dr. Lou but the song was not moving in the right direction. The nuances of being together in the studio were lost. After much work & discussion, it was mutually & amicably decided to take the project elsewhere. Brandon Broderick was open to pick up the pieces. Between Broderick & a new contact (Amaury Perez of Future Sounds Mastering), "Alone in the Dark" was finished almost 18 months after it started.

"Alone in the Dark" REVIEWS:

-“Alone in the Dark” is a song with edge & depth. Energetic rhythm section performances lay an excellent foundation for expressive melodies & fascinating sonic textures. Anker delivers a charismatic vocal performance & the song is undeniably catchy. Listeners will love the ever-progressing flavor of this song. Lyrically, “AITD” pays respect to loss & challenging times. The inspirational sound of the music contextualizes the lyrics in an uplifting light. Anker’s expressive vocal track brings the lyrics to life. The arrangement of “AITD” is intricate & compelling. The opening groove is so strong that listeners will “buy-in” to the song. The chorus is powerful & the synth layers elevate the music. Anker’s performance is engaging & sincere. This is well-written music that is expertly executed—heartfelt rock music with an emotional depth…well done.”

-A swelling of what sounds like a bass synthesizer (If that’s even a thing. Don’t quote me on that.) sets the tone as I traverse into the world that is “Alone In The Dark” by Anker. A song that touches on themes of loss & isolation at the hands of the Covid-19 pandemic packaged in a catchy, danceable & surprisingly upbeat sounding pop tune with an indie vibe. Amidst the 80’s inspired synths, understated guitar lines & thunderous percussion, “AITD” has a distinct sonic quality that is hard to pin down to any genre. The drum-kit sound is nice & big with a crisp snare nicely compressed & a punchy kick drum that thumps your chest that otherwise would suggest that all signs point to hard rock. The vocals, however, take a different approach as they are more reminiscent of a band like Urge Overkill & are a bit more buried in the mix, which gives each of the instruments equal space & allows them to play nicely together. A refreshing alternative to having the vocals be front & center.

-"Alone in the Dark" brings nostalgia of an 80s rock classic. The groovy baselines & synth arpeggios take you back to that era. The verse comes in strong with a rhythmically catchy melody. Then the powerful chorus comes in with some beautiful high melodic notes that hit home. Then a musical interlude comes right after the hook with a gorgeous round synth patch sustaining some lush chords. The synth arpeggios shine through during the bridge with an impeccable tone. A surprising section happens in the song's outro with a beautiful guitar melody & some nice distortion that adds a more rocking timbre to the record. Then, the synth pad joins the guitar & adds a beautiful, round element to the outro. I love how the guitar fades out at the end of the song. Anker's vocals are superb. He has a similar tone to John Mayer, a rich baritone voice that captures some flattering frequencies. You can hear the power in his voice. He has a unique style to his singing that has character.